The word Shinto comes from the Chinese word Shen-tao, which means “The way of God”. Shintoism is a Japanese traditional religion. It is one of the world’s oldest religions. It is the Japan’s major religion beside Buddhism. Both religions have co-existed similarly in Japan. Shinto is related theologies, rituals and practice.

1. Origin and History:
Shinto is called Japan’s indigenous religion. Important part of the history, Shinto has shared its spiritual, cultural, and political roles with Buddhism and Confucianism. Its beginnings are difficult to mark but thought that it was first used in the 6th century C.E.
It has no founder and no formalized system of theory. No belief in original sin and savior. There was no any individual or group who were responsible for developing Shinto as a religion. No spiritual holy text. But, in the 8th century C.E, the Nihonshoki (Chronicle of Japan) and Kojiki (Record of Ancient Matters) were written by the rule of the Yamato clan. Include records of ancient mythology and deal with religious matters and rituals of the shrines. Buddhism and Shintoism developed beside for many centuries. Worship of both was normally led in the same temple complexes. End of the 11th century there were only twenty-two official Shinto shrines.  And Buddhist deities regarded as the same as specific Shinto kami were worshipped. During the Edo period from1600-1868, Shinto was separate from Buddhism. National Learning movement starts in the 17th century that the renewal of imperial rule in 1868 for the State Shinto. It dominated in Japan until the end of World War II.

2. Belief:
Shintoism is a polytheistic belief. Shintoism expresses joy, love and respect of nature. Shintoism is a religion of wonder of life, peace and harmony among people. Shinto is the concept of kami. Kami is a general term for deities and spirits. Including the Japanese Islands and three major Japanese gods-1) Amaterasu, the sun goddess, 2) The emperors of Japan and, 3) All of the Japanese people are created by the deities Izanagi and Izanami. No difference between a human being and kami. All living beings and sacred areas, mountains, rivers, or trees are also assumed as kami. Human is higher level than animals and the children of kami and ancestors. Human beings loved and protected by kami. Work in daily life is made possible according to the blessings of kami and ancestors.
The focus of the ultimate in relationship to humanity is earth. There is no sense of original sin but it has a sense of moral evil in Shinto. Human is sacred and pollution is the result of normal acts such as things death, blood or disease. Shinto practitioners are belief that numbers of Gods or kami are increasing day by day and it is a continuous process. The most important law of salvation calls for obedience to the emperor as a kami being. It observes all taboos and avoids pollution. In Shinto life is good and death is evil. It regards death as a curse also an abnormality or misfortune.

3. Rituals and Rites of passage:
Ritual is central to the practice of Shinto. Including the sword and the mirror there are many Shinto symbols. The central symbol of shinto is the Torii Gate. Build within two uprights and a cross beam. This gate is the gateway to the gods. It symbolizes leaving the finite world for the infinite world.
Most of the Shinto rituals are aimed to keep away evil spirit through purifications, suffering and entertainment for the kami. Purification is most important for the reason of removing all pollution, unrighteousness, and evil. Usually purification is done by the individual worshipper, layman, or priest. Before worship, purification is important. In worship, the spirits are invited to the shrine and evil spirits are expelled.
Suffering is not a form of punishment for human behavior. It is as a natural element of human experience. Norito are Shinto ritual prayers that are addressed directly to the kami during formal ceremonies. Jichinsai are ceremonies held before the construction of a building in Japan including business or private.
Other typical rituals are Adoration, Presentation of food offerings, Prayers which started from the 10th century CE, Music and dance- Kagura are ritual dances accompanied by ancient musical instruments. The dances are performed by skilled and trained dancers, Offerings-these are symbolic and consist of twigs of a sacred tree bearing of white paper, Removal of offerings, Closing the sanctuary, Final adoration, Sermon-these are optional, Ceremonial meal which is reduced to ceremonial sake drinking and Mamori are charms worn as an aid in healing and protection.
Sacred time in Shinto is focused on the human life cycle such as birth, coming of age, wedding and funerals. New Year, Harvest, National Founding Day in February is major matsuri. Famous festivals include the Gion Festival in Kyoto, the Takayama Festival in Hida, the Chichibu Festival northwest of Tokyo and other significant moments are also celebrated. Sometimes it is synchronized with Buddhism.
Where a kami has exposed is sacred space including trees or mountains and Shinto shrines. A shrine indicated by a Torii gate atop a high-rise building. Inside the shrine, believers wash hands and rinse out mouths to purify themselves.

It was common to have a kamidana within the home and workplace. Daily offerings were placed on them for the kami. People visit a local shrine to pray a desire to do so. The Japanese have their wedding ceremonies in Shinto style and pronounce their wedding vows to kami. Shinto funeral ceremonies are not popular and their funerals in Buddhist style.

4. Population and Community:
About 80-90 percent people of Japan practices Shintoism. Approximated that it has total 30,00,000 followers. Many tribal also belief in Africa. A number of Shinto practitioners also live in Europe, Latin America, Northern America, Oceania and Euraia. Shinto membership is counting who join organized Shinto sects. Shinto has 81,000 shrines and 85,000 priests in Japan. Shrines are supported and maintained by community groups. The larger shrines are members of national shrine associations. Ise is the main shrine of Amaterasu. Have significance for the Japanese nation as a whole. Shrine is also serving as centers for community life.

5. Divisions:
There are four major divisions of Shintoism.
State Shinto: State Shinto was founded by the Emperor Meiji in the 1800’s. It values on patriotism to the Emperor and Government. State Shinto was abolished in 1945 because of World War II. It newly founded democratic government.
Sect Shinto: The date at which it was founded is unknown. Sect Shinto was founded by the farmers and the peasants in rural Japan.
Shrine Shinto: It is the main tradition of Shinto. Shrine Shinto was created after World War II, when most of Shinto shrines were destroyed by the Japanese forces or U.S Bombing raids. Shinto peoples came together to form the Association of Shinto Shrines (AOSS). They rebuilt most of the shrines around Japan and trained priests to maintain the shrines and lead the rituals. AOSS oversees about 80,000 shrines nationwide.
Folk Shinto: The time it was founded is unknown. Folk Shinto is a combination of Buddhist, traditional Shinto and several religions in the area. They worship local Kami at in-home shrines. In-home shrines are called Kamidana or God Shelf.

6. Religious practitioners:
Chief Priest maintains the shrines and led the rituals. Priest is the main religious practitioner. Sometimes authority plays a great role as a practitioner. There is no special day of the week for worship in Shinto. People visit shrines for festivals, for personal spiritual reasons, or to put a particular request to the kami. It also allows worship at home within a group or individual. 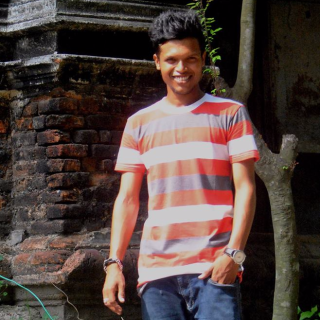 This is "SAMEER NAYAN" (MUSLiM ARTiST). From Dhaka, Bangladesh.